Hunters’ Illustrated History of the Family, Friends and Contemporaries of Robert Burns

Conceived by Colin Hunter McQueen around 2000 after he perused an illustrated volume of “Tam o’ Shanter” by the Scottish artist George Cruikshank. This book is designed and Illustrated by Colin and written, compiled and researched by his son, Douglas Hunter. 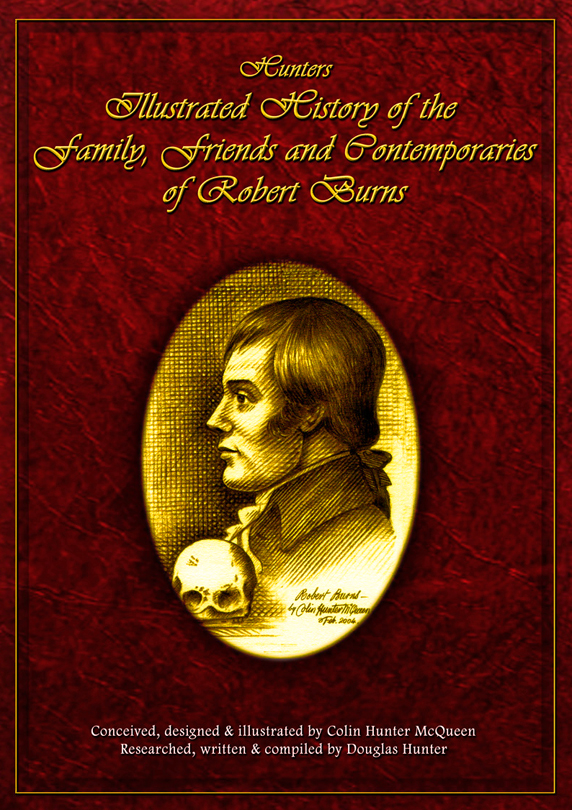 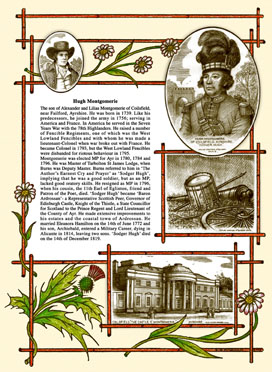 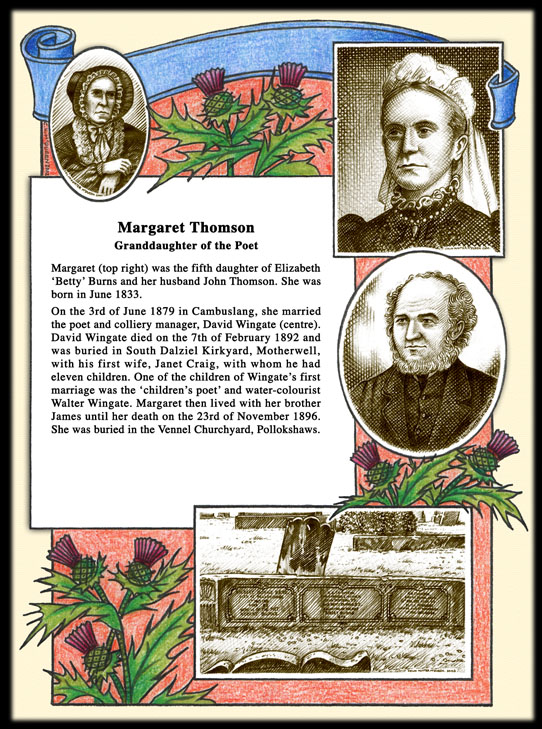 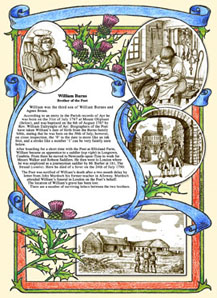 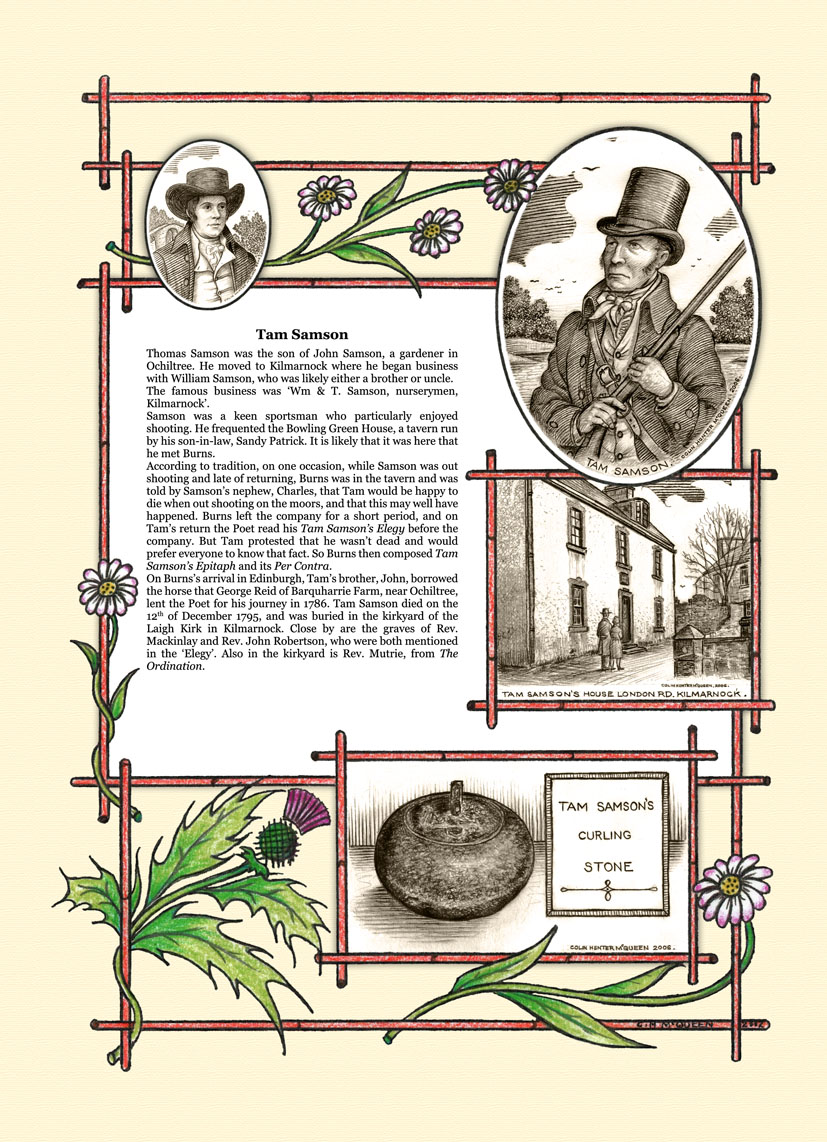 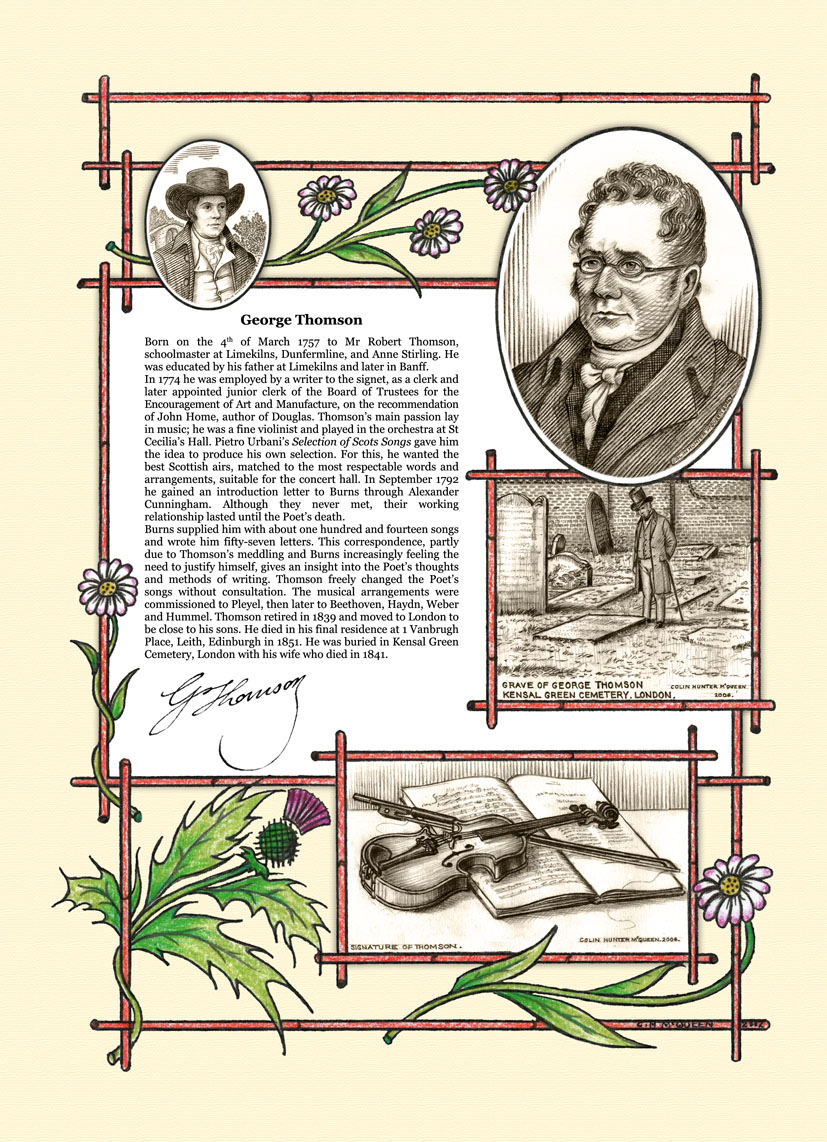 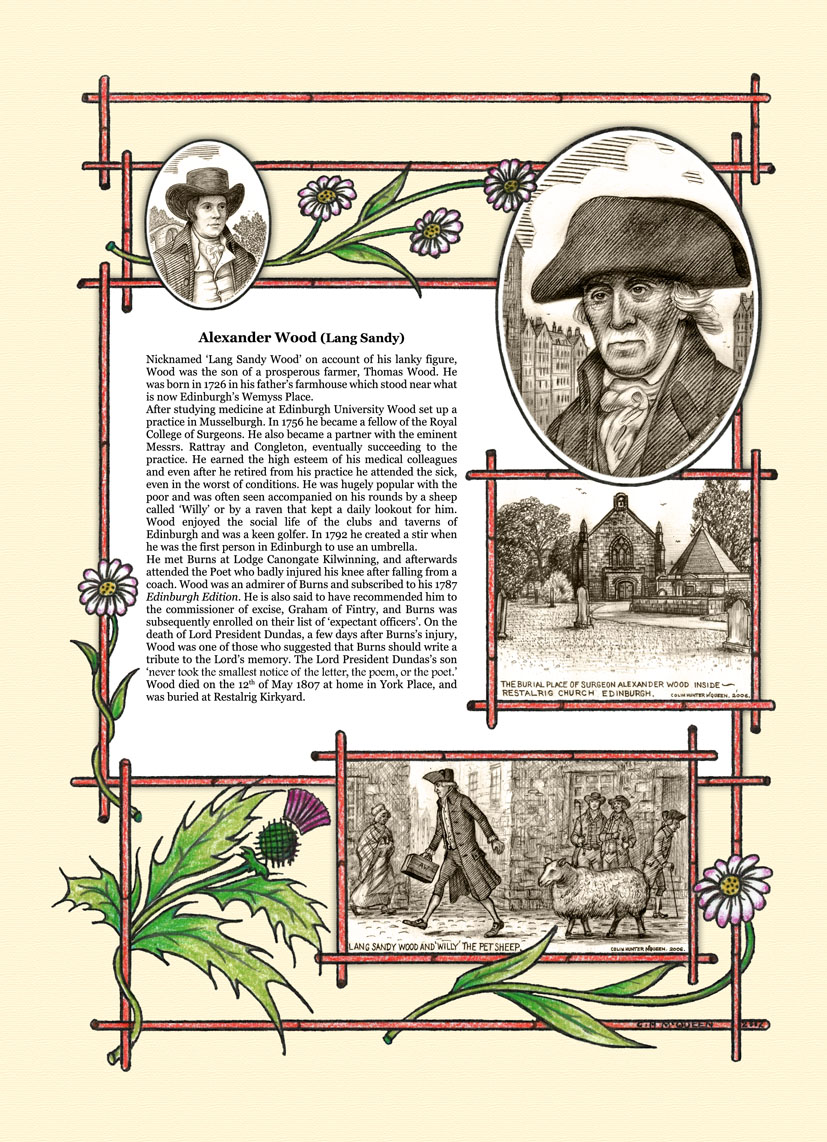 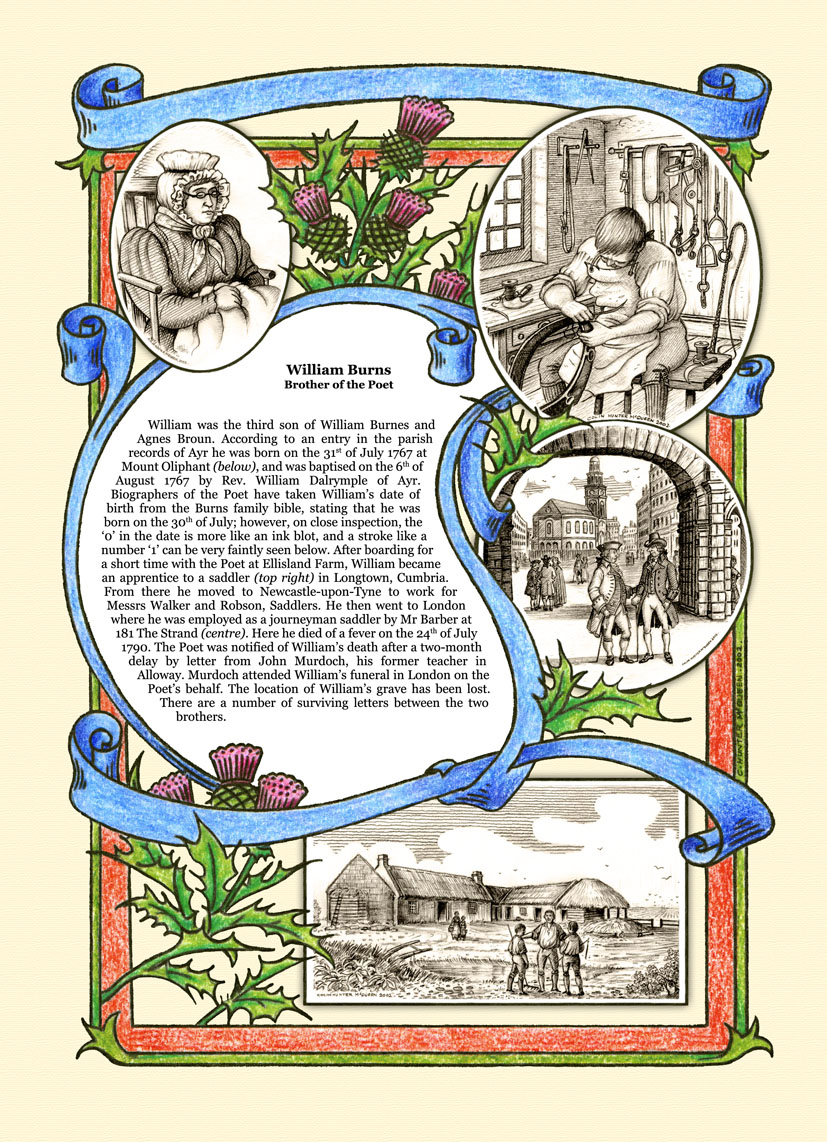 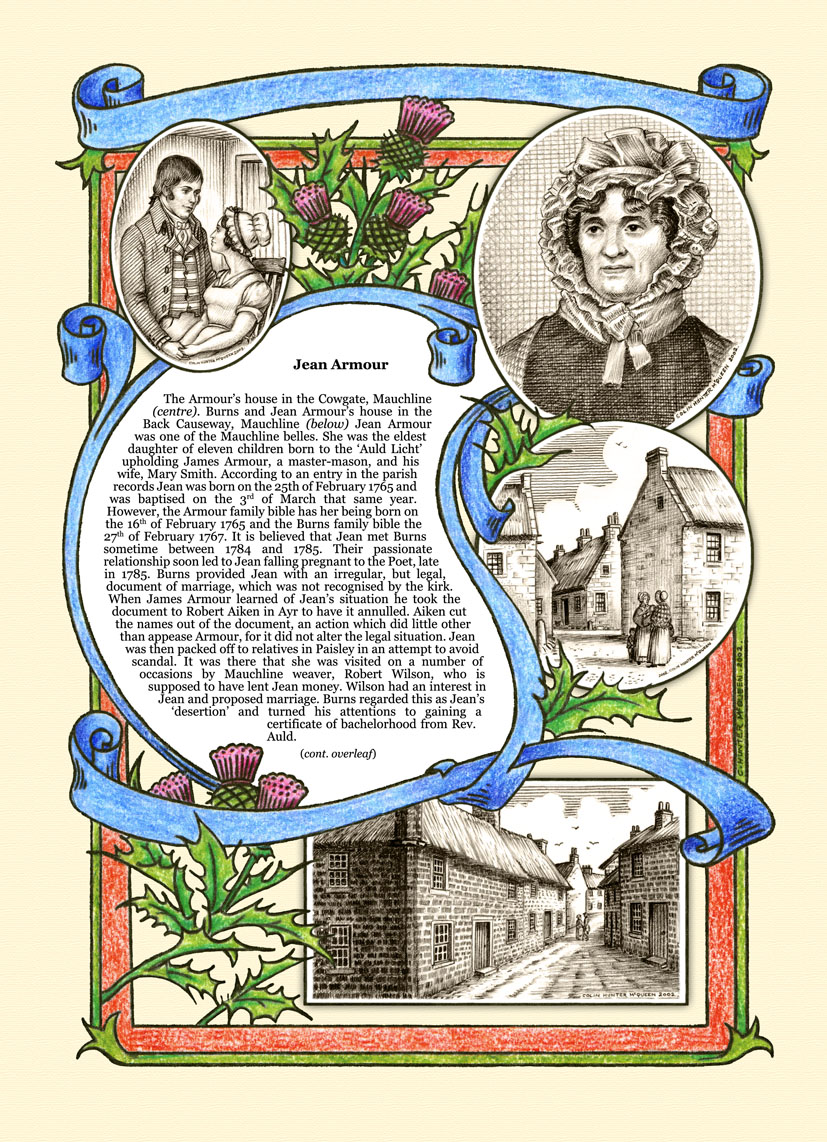 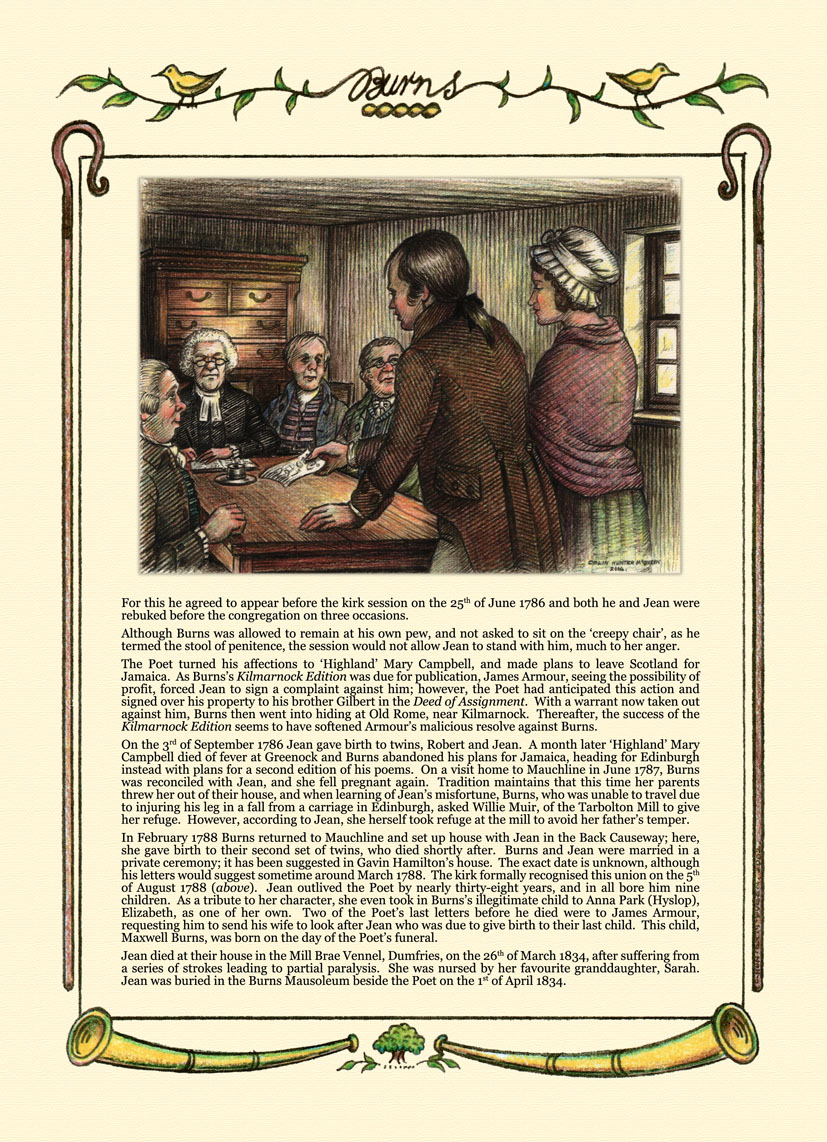 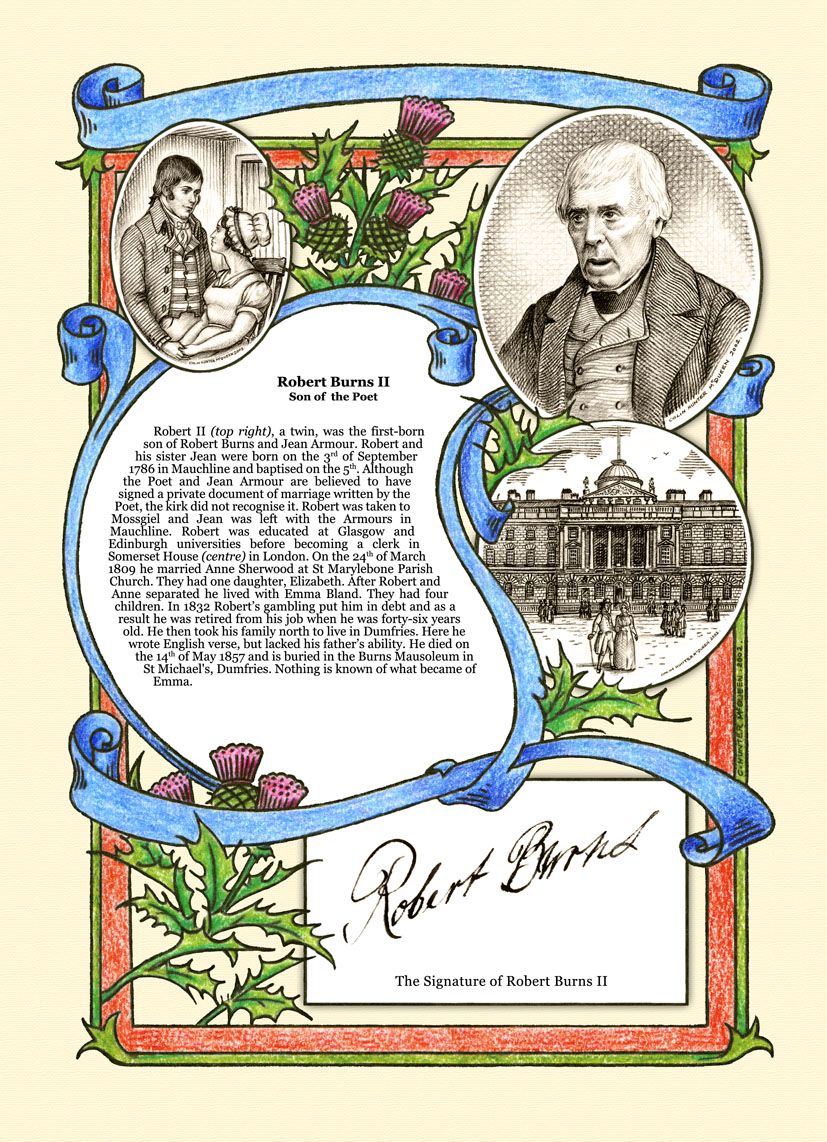 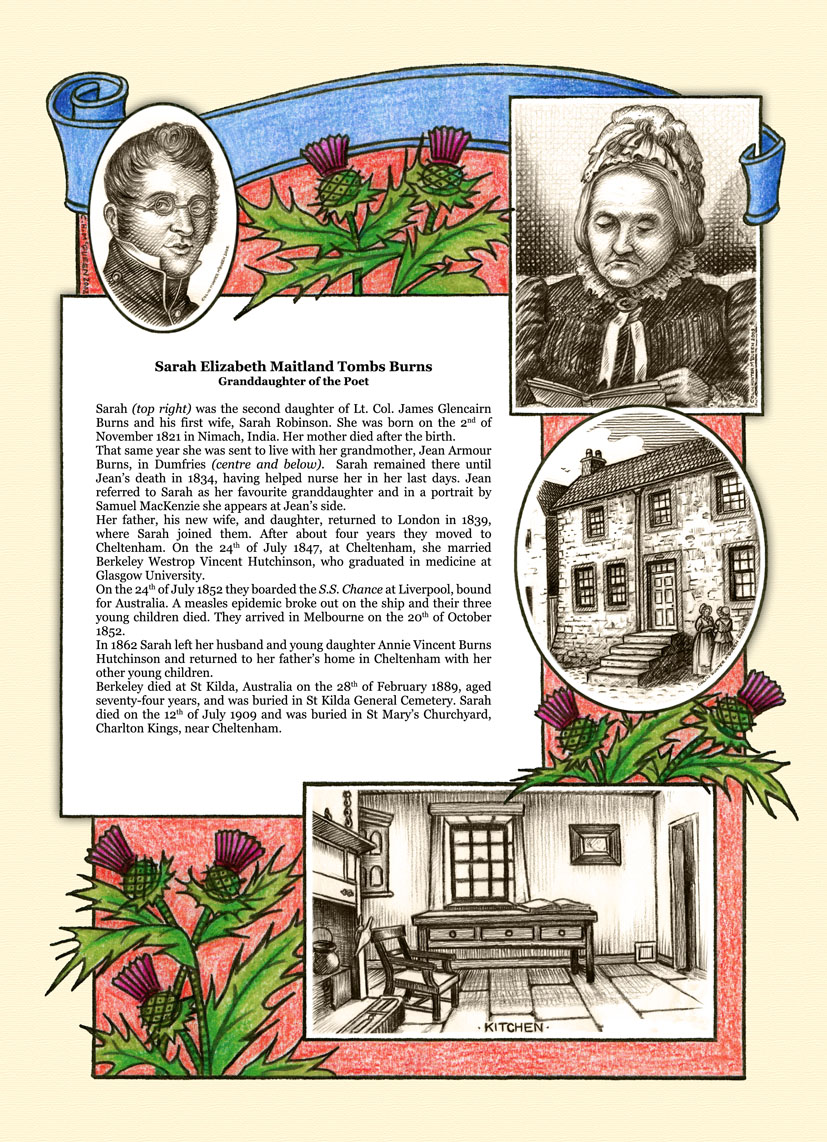 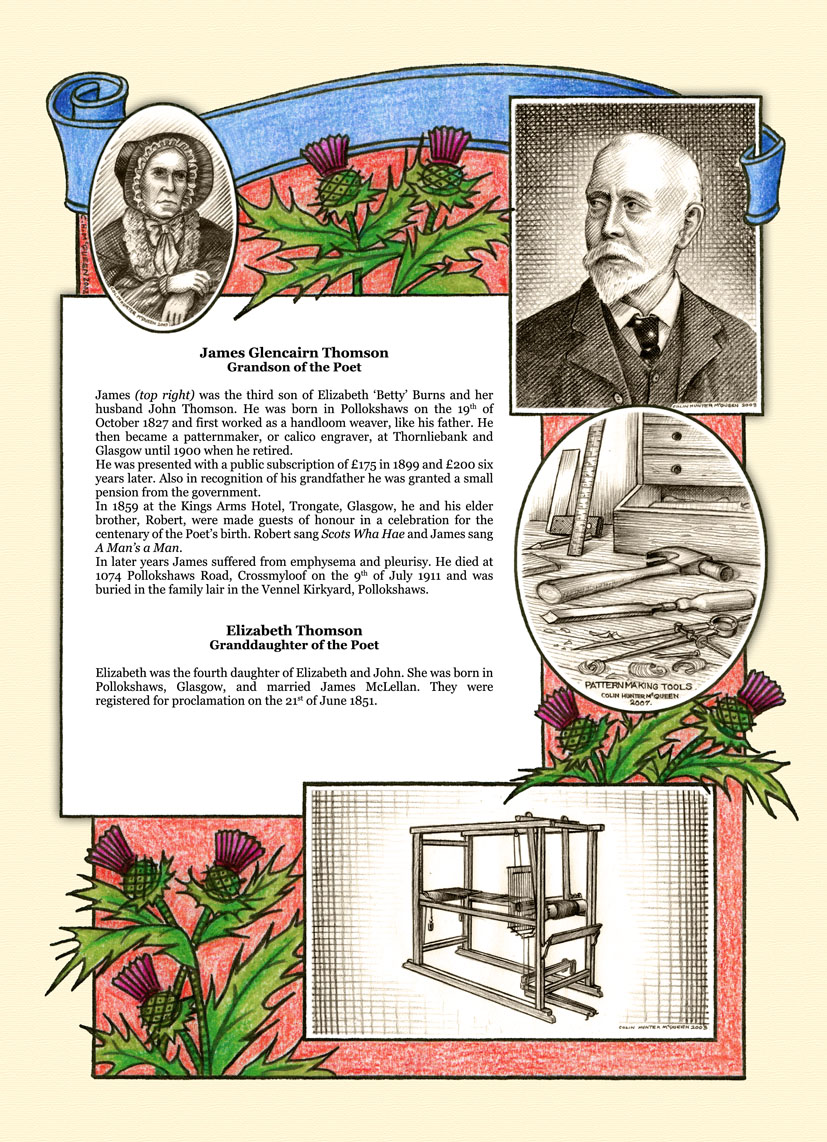 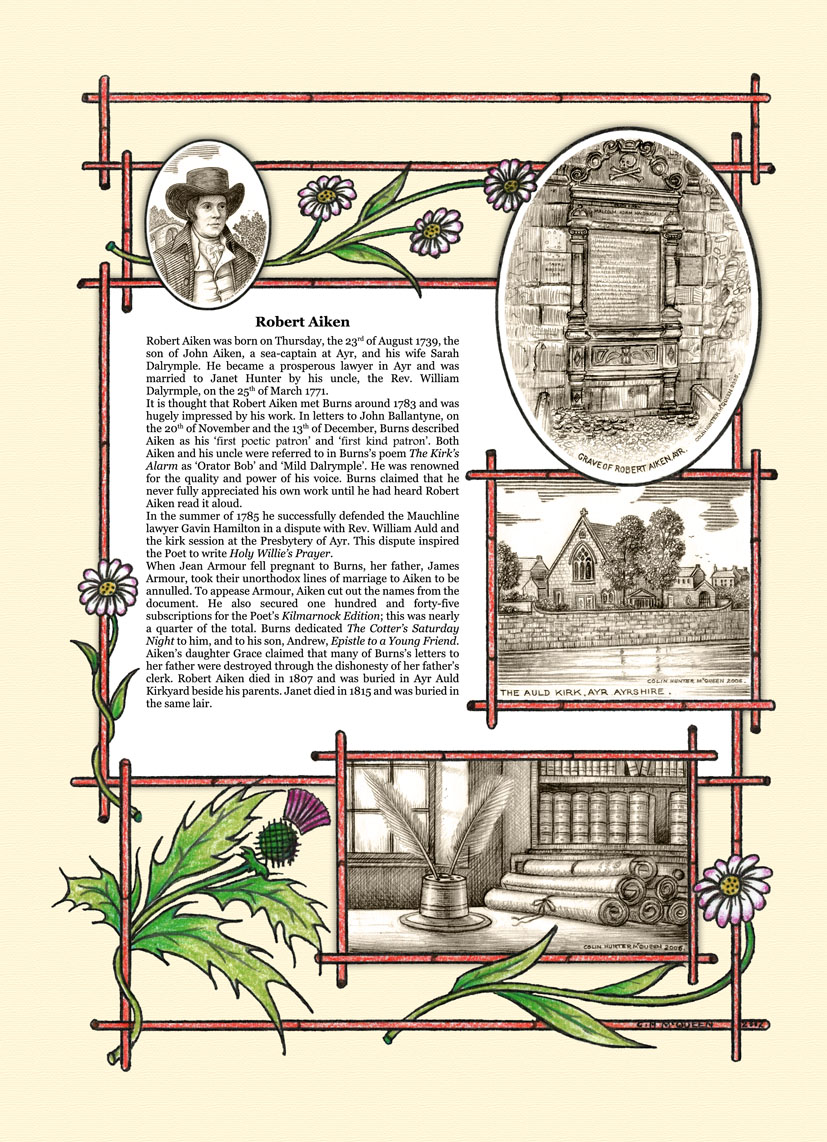 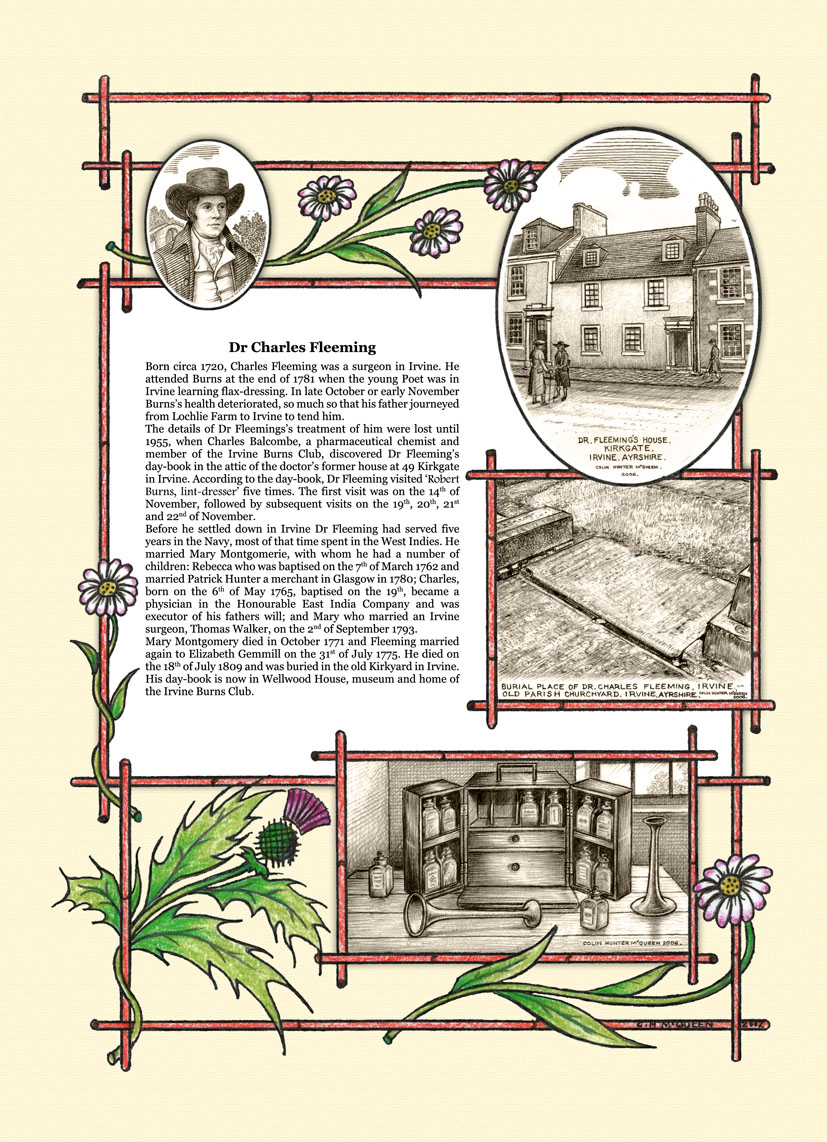 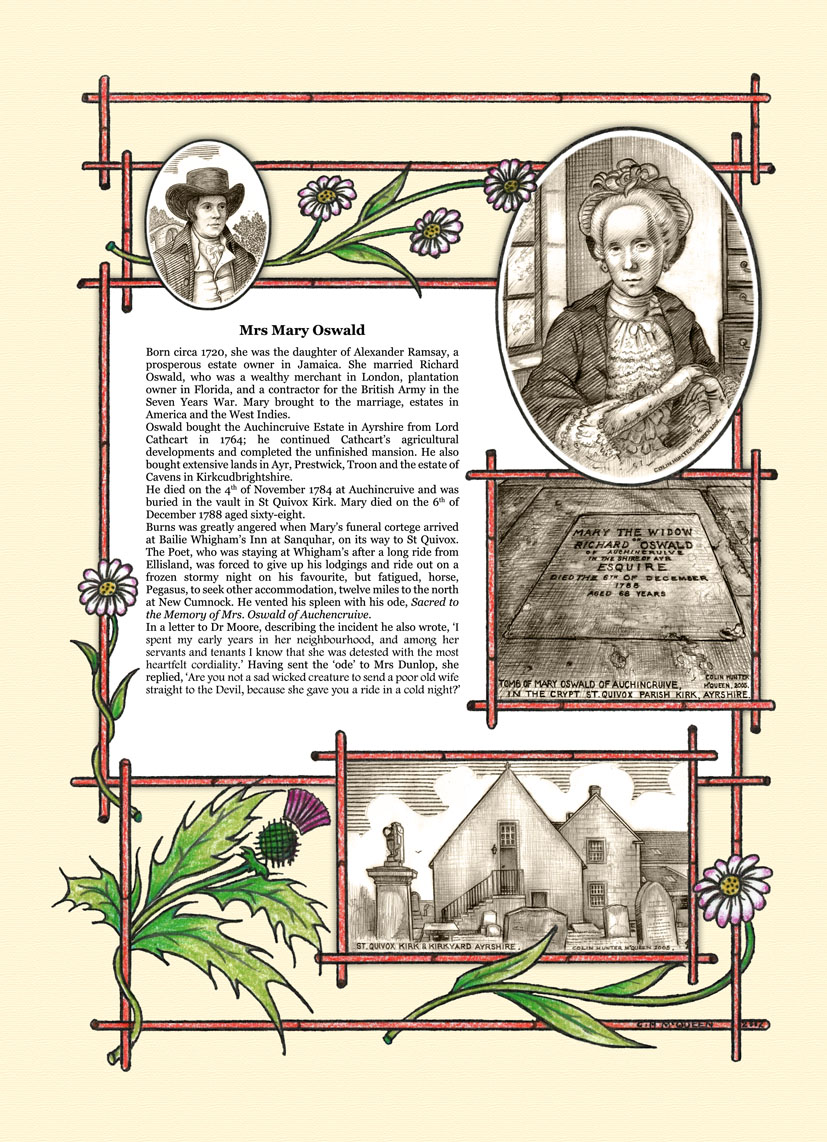 A 322 page, subscriber’s edition, limited to 2000 copies; this book contains over
six hundred illustrations by Colin, and over three hundred birth, baptism,
marriage, death and burial records were located during its research, correcting
many long established mistakes by previous authors of Burns-related literature
and unearthing new information about the family and friends of Robert Burns.

There are over a thousand people in the book who in some way claim connection to the poet.

Among the subscribers to this book are Sir Alex Ferguson CBE and the First Minister, Alex Salmond. 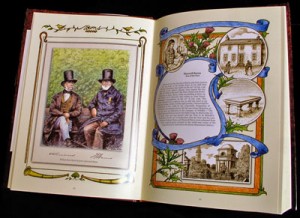 Only 2000 copies of this book are available. These will be signed by the illustrator and author and will be individually numbered.

The volume has been highly acclaimed at home and abroad by many eminent academics and Burnsians such as the following:

Emeritus Professor G. Ross Roy, University of South Carolina, USA (Widely regarded as the world’s foremost authority on Robert Burns)  : “This book is indeed a treasure trove of information….Users will find real pleasure in the fine illustrations which illuminate every page of this work.”

Dr Elspeth King, Director of Smith Art Gallery and Museum, Stirling :  “This book is a tribute to the work of Scotland’s national poet, Robert Burns, in the 250th anniversary year of his birth…This work by Colin Hunter McQueen and his son Douglas Hunter offers the opportunity of exploring the works and the world of Burns in a refreshingly new way…In many respects the book is a social history of Scotland, centred on Burns. It is also a family history, not just for Burns but for his known contemporaries. It is also a travelogue, which takes readers down roads less known and less visited in connection with Burns…It has taken over eight long years to
deliver this beautiful volume for 2009 and as a treasure for future generations.”

Dr Kenneth Simpson, Honourary Professor, University of Glasgow : “What follows is a labour of love; it also represents scholarship of the highest order…This splendid volume is a mine of information. In opening its pages, the reader–whether newcomer to Burns or old hand–embarks on a voyage of discovery, expertly led…Exhaustive research has borne fruit…This book affords invaluable insight into life in Burns’s time…Burns could have no finer tribute than this book which, from its every page, speaks of the devotion which the Bard and his work have inspired.” 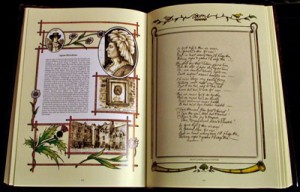 Dr John Cairney, actor and author : “What you have just read is a labour of love, the sum of one man’s life-time enthusiasm for the subject and a testimony to the skill with which Colin and his son, Douglas, have realised his long-held vision of the finished work. It has been nearly a decade in the making, every hour of which shows in the detail and thoroughness of each page. It is a work of art in every sense, in the graphic and comprehensive illustration, in the scholarship of the research, and in the understanding shown of Robert Burns as a man and a poet…It could, in fact, be termed a picturesque encyclopedia…”

Dr Gerrard Carruthers, Head of Dept. of Scottish Lit., Glasgow University : “This volume is an invaluable asset to all Burns scholars and lay men alike.”

W. J. Smith, Past President and Treasurer of Kilbirnie Roseberry Burns Club: “The level of research that has gone into this publication is astonishing. It gives us the opportunity to fill the many gaps of knowledge that can only be gathered through having an intense curiosity and insatiable appetite for anyone familiar with the works of our National Bard.The accompaniment of the many fine drawings is only what we have come to expect from possibly the best artist in the known Burns world. Script and drawings have been combined to make a wonderful presentation.It is an excellent reference book and is definitely a ‘must have’ for the collector of Burns material.”

Matthew H. Gilbert President, Dundas Burns Society, 1059 Past President of Stirling Clacks and West Perthshire area of Burns Clubs:  “As a student and admirer of Robert Burns I find this book highlights the different facets of his life and of Scotland in his time.  The manuscript illuminations are first class , the text is well researched and informative.  It took sheer hard work, dedication and a life times study to produce this amazing book.  The members of any society will certainly purchase and enjoy this fine work of art as numerous others will.”

John Inglis, Past President of the Burns Federation and Irvine Burns Club: “Past authors and admirers of Burns have produced many books but few have reached the art of ‘Hunters’ Illustrated History of the Family, Friends and Contemporaries of Robert Burns’. Colin Hunter McQueen ranks alongside the foremost illustrators of the past. His son Douglas’s research has unearthed a wealth of new material; he has studied over three hundred birth, marriage and death certificates. Both Colin and Douglas searched through many wide-spread sites and kirkyards and in doing so have thrown more light on the poet’s life and travels. The illustrations are remarkable and are of the very highest quality and the text, with additional notes and valuable index, does credit to the authors.” 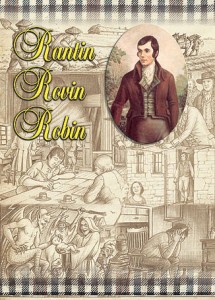 This is a remarkable work whose execution occupied much of its creator’s time and energies over a period of three years, but which was obviously in gestation over a much longer time. The attention to detail is matched by a brilliant mastery of composition. The incidents in the poet’s career are vividly delineated, and those who have the privilege to know Colin personally will appreciate his pawky humour, especially in the clever use he has made of the portraits of family and friends to breathe life into the people who have themselves gained immortality through their connection, however slight, with the Bard.

Colin Hunter McQueen is a modest and very private man whose knowledge and passion for Burns is undoubted. As an avid Burns fan and an artist of great versatility, Rantin’ Rovin’ Robin is the culmination of 3 years hard work. Colin chose to produce a book, the like of which has never been seen, using his exceptional pencil drawing skills to depict the life of Robert Burns. Each detailed illustration is presented in chronological order with a short caption describing the scene. In total, the A5 size paperback book comprises 314 hand illustrations and 6 related hand-drawn maps. This book will appeal to all levels , for younger people including children & students, as an easy to use educational tool. For Burns enthusiasts who would value Colin’s vivid imagery and interpretation of Burns’ life. As a valuable edition to your collection of Burns books. As an enjoyable light read, bringing to the fore both the key moments and the lesser known facts in Burns’ life. 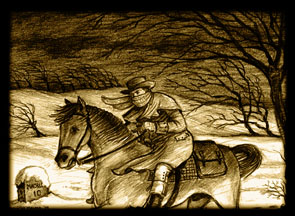 “Rantin’ Rovin’ Robin – is the first concise and comprehensive study of the life of Robert Burns executed by illustration and text. It contains six appropriate maps and 314 chronological illustrations following Burns’s life from his ancestors in Kincardine until his death in Dumfries. This volume with a foreword by Dr. James A. Mackay (journalist & author) is a must for Burns lovers of all ages including those who know little of the bards life.”
– John Inglis – Past President of Robert Burns World Federation

This is truly a labour of love – conceived, nurtured and brought to life through sheer hard work, persistence and dedication to an ideal, with Burns himself as example and inspiration. The result is a major achievement which will, I am sure, uplift and inspire generations of Burns devotees in all the years to come.”
– Dr. James A Mackay – Author & Journalist

“It is a welcome addition to the ever expanding material on the bard, and will be greatly enjoyed by all who pursue it’s text.”……..”Colin Hunter McQueen has presented it in an accurate, chronological manner, that should, for the most part, satisfy the most demanding Burns scholars”
– Norman R. Paton – Author

“It is certain to be highly prized by many thousands of Burns enthusiasts throughout the world who already know the Burns story and they will all the more easily appreciate the authenticity and beauty of the illustrations”……..”Each illustration tells a story which could hardly be expressed better in words ‘though all are carefully and knowledgeably captioned”
– Angus MacDonald – Journalist